“…Provocative and ironic, Fabio Coruzzi’s language describes scenarios of social criticism, reflecting almost specularly the cultural reality of our metropolitan society, sandwiched, as he says, “between concrete and the asphalt”. Anonimous figures, chaotic spaces, urban life’s scenes,women and men in their working environment, athletes and hooligans at sport events, traffic of the city..Life flows incessantly within Fabio Coruzzi’s work and the author become a faithful witness of it…”

“… as architect by training, I was immediately struck by Fabio’s cityscapes, there was a kind of roughness that reminded me of sophisticated graffiti”

“There isn’t any general introduction to my art, I am getting allergic to presentation because I care about the content instead of the package.

At this stage of my career or artistic life, I do not follow any narrative in particular, I find myself inspired by single episodes, single artworks, single thoughts.

My body of work is made by single pieces that might fall in some category, but after all these are single stories. Each artwork tells a story that might not have any link with a previous artwork. It’s a independent, autonomous thought. Establishing a common introduction is almost impossible.

Making a statement reduce the possibility for an artist to express and explore at 360 degrees. Every written sentence can be changed, continuously reinterpreted. My artistic research is always free to develop within any direction. It’s more like a book, or a movie. It tells right there and stays right there. What comes next is life: I never know. It’s just a restless evolution”

” am trying to use my art as a tool to vandalize, to spoil the fake beauty, the fake symbols, the fake principles, the fake values of contemporary society.The intros to my work want to be a mix of real life and visual poetry”

I wish that each painting I make should be like a poem of the place where I’ve been. I wish to become a poet of our time, like somebody would tell: “I’ve been there”, but telling that my way, telling the audience that, no matter where we are, in a boulevard or in a toilet, each single place is like an empty box that need to be filled with the intense energy of our existence. Each place leaves a mark, like a scar, inside us. I wish that scar become poetry. 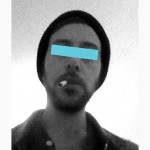 Born in Italy, 1975. Living and working in Los Angeles